Thank you so much great and powerful Internet for helping me throw together a super fun Harry Potter party for my daughter’s 10th birthday.   She is obsessed with those books, and was really hoping all the little details would be authentic.   What did people do before Wikipedia and Pinterest – honestly?   So to pay it forward, here’s a quick recap of some of the party details we created. Hope they help some of you crazy Potter fans down the road…

We rented a little neighborhood cabin so we were able to have a great yard and picnic tables, as well as some good indoor space for the event.   Bathrooms were labeled “Ministry of Magic” and “Chamber of Secrets.” 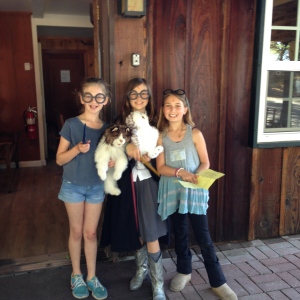 The kids entered “Diagon Alley” (through the front door) and visited several shoppes which we had set up on different benches. First was Gringott’s Wizarding Bank where they got little golden bags of “Galleons”.  Then on to pick up cauldrons which they used to collect everything else at the party and became their goodie bag.  I had chalk pens and chalk labels out so they could put their names on them, which I highly advise as cauldrons got mixed up throughout the day!

After grabbing feather quill “pens,” they made a final stop at Olivander’s Wand Shop to create their wands.  Yes these wands are plastic, but they were great because they’re hollow so the kids were able to stuff them with a variety of feathers, ribbon, etc. which we called dragon’s heartstring, unicorn mane, phoenix feathers, kelpie hair, kneazle whiskers and the like.  We sealed the ends with painters tape.   Finally the kids picked up their train tickets and proceeded out a side door through a red brick wall at platform 9 ¾ to Hogwarts. 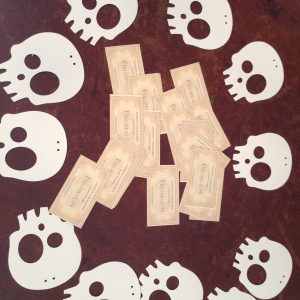 Once they arrived, they lined up for the sorting which we accomplished by placing a walkie talkie in the sorting hat, as my son watched through a side window and called out the house assignments. We pre-assigned the kids to different houses to even out teams and friends, etc.   Each child got a house badge which my daughter had traced from images of the house shields, a school ring, and a Spell Book. There are a bunch of sources for Hogwart’s spells online – here’s a good one we used: https://quizlet.com/9342873/harry-potter-spells-charms-incantations-and-curses-flash-cards/.

Now on to classes.  We had three “classroom” tables (taught by guest professors, aka conscripted grandparents/parents) including:

Divination – where my husband read palms and handed each student a rolled up fortune.  We dressed the table up with scarves, dream catchers, an umbrella, a crystal ball that my daughter had made, and other fortune tellery sorts of things. 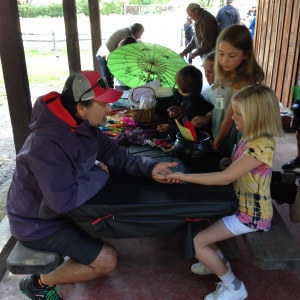 Care of Magical Creatures – where each child put together a “Monster Book of Monsters” by gluing furry fabric, felt and googly eyes to little spiral notebooks I picked up at Staples.  Honestly I thought this one would be hard for them, but the kids loved this project and the books were each unique and super cute. 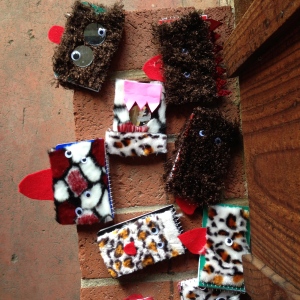 Herbology – where each child decorated a small pot with paint pens and stickers, and potted a variety of magical plants such as venomous tentacula, mandrake sprouts, devil’s snare, gillyweed and mimbulus mimbletonia.   I picked up small flats of vines and flowers at the garden store for these.

Honeydukes was of course open for business all day, and the kids had to use their gold Galleons to buy an assortment of treats such as pumpkin juice (mango lemonade), butterbeer (root beer topped with whipped cream), brooms (pretzels with shredded string cheese at the end), muggle fruit, chocolate frogs, lighting bolt tattoos and pixie puffs (aka pirate’s booty).   Children earned a “free” box of Bertie Bott’s Every Flavor Beans after they participated in a blind jelly bean tasting of surprise flavors ranging from soap and earwax to earthworm and vomit.  Hilarious.

Then we commenced the Wizarding Tournament – a great way to run off all the sugar!   Events included a relay race on brooms, dashing around cones with “dragon’s eggs” in spoons (finally used up those sparkly Easter eggs I still had in my fridge!), a scavenger hunt in the Forbidden Forest to find colored spiders, and a sort of bean bag toss through Quiddich hoops we had made from embroidery hoops superglued to poles we found at the fabric store. 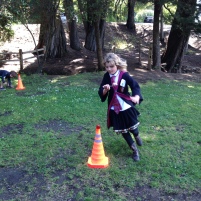 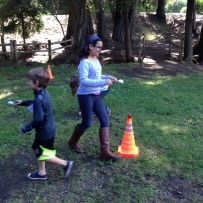 We shortcut a little and got a chocolate Safeway cake with marshmallows surrounded by kit kats that we called a “Cauldron Cake” and topped with one of those fancy blooming candles that’s like a giant sparkler.  My daughter and I also made Golden Snitch Cake Pops using powdered doughnut holes that we lightly misted with water, dipped in gold sprinkles,  fitted with rice paper wings, and mounted on lollypop sticks .  Personally I thought these were the cutest things at the party. 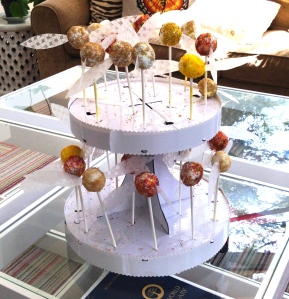 Wiggly kids wrapped up the day with a “Spring Ball” karaoke dance party back in the cabin while we waited for parent pick up.   Overall a lot of little details, but such a fun day, and a very satisfied 10 year old Potter fan…   As for me, I am all caught up with Harry Potter for the moment – maybe a pizza pool party next year?

Here’s the list of fortunes we made up for Divination class: